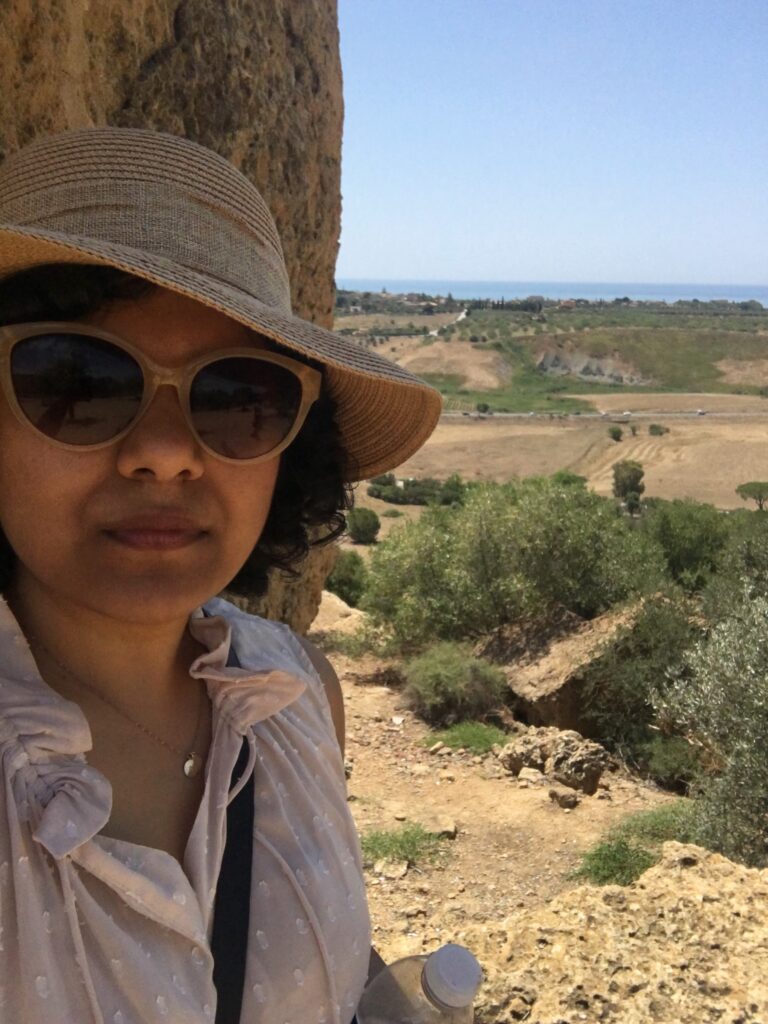 I began writing the article for this issue during the summer of 2018, when I traveled around the island of Sicily by road with a dear friend. It was the first proper vacation I had taken in ten years and exceeded my expectations in every way. We rambled through the cobbled streets of Palermo, Catania, and Siracusa, ducking into centuries-old churches and cathedrals, soaking up sun on the beach in Cefalú, strolling through the ruined Greek temples of Agrigento, taking languid breaks from the heat with a granita or a gelato or a spritz. In other words, we were playing tourist with great gusto. But the whole time I couldn’t help wondering how much longer this would even be possible—this kind of freedom to travel, this kind of freedom to be in certain spaces, in certain countries, in certain parts of the world.

I knew it had become impossible already for so many who look like me or with whom I share cultural ties, and proved tragic or fatal for many who tried. In 2018, thousands upon thousands of refugees arrived to seek asylum on the southern shores of Europe, including Sicily, during what the media and politicians had dubbed an ongoing “migrant crisis.” I thought of this often throughout my trip: when encountering a show of contemporary art in Palermo meditating on the number of migrants who have crossed the Mediterranean or perished doing so. When walking past a group of young, anxious-looking Black men filed up in front of an immigration center in Siracusa. In any chance conversation about Trump or Brexit or the Italian government or the E.U. Or while walking into the sea because I wanted to, not because I had to, and staring out across the blue expanse knowing I could head back onto the shore and no one would stop me.

There were many moments I felt suddenly that I had no right to be there as a traveler, or more so a vacationer, when so many hundreds were dying just to place their feet on the same Mediterranean terra firma where I stood. It is an injustice so vast and cruel that I still cannot fully fathom it, despite having spent nearly a decade studying and writing about postcolonial migration to Europe. In Palermo, we were fortunate to meet a friend of ours who was doing anthropological fieldwork with a grassroots organization providing support for migrants in Sicily, regardless of legal status. As our local guide, she took us to parts of the city where recent migrants and refugees—her friends and colleagues—regularly came together for kinship, information, and services, both over and under the table. I could see clearly in these spaces the power of the ad-hoc communities being forged by refugees and migrants in Palermo, creating their own systems of justice, economy, and solidarity to supplement that which the state had denied them.

After two weeks in Sicily, I spent a few days in London before returning to the U.S. I was alone in the city with no particular plans. After scanning some options in Time Out the first night I was there, I bought a last minute theater ticket for a recommended West End play called “The Jungle.” It was set in the refugee encampment of the same name in Calais, France, which had been torn down just two years prior. When I got to the theater, I saw that the play was to be on an immersive set meant to emulate the temporary restaurant that had cropped up in The (real) Jungle encampment. Audience members seated on the main floor could order chai and naan from the waiters (who were actually acting in the play), but I was sat in the balcony, which was deemed the “White Cliffs of Dover.” As I watched the drama unfold from above, I realized by virtue of my seat assignment, I had been interpellated as an effective Briton. I was on the side of the English Channel which the refugee characters in the play aspired to reach. That is to say, I was once again positioned in the place of privilege, watching from above.

As an audience member I witnessed, from a distance, the accelerated lifespan of a temporary encampment transitioning into something resembling a city, forged by people who shared little besides having survived inhumane traumas. A number of the actors on stage were themselves refugees who had actually lived in The Jungle before the French government ordered its razing. As the play progressed toward the grim denouement of the encampment’s destruction, I pulled from my purse the little notebook and pen I always carry and began to scrawl in the dark.

I recorded lines of dialogue both incisive and moving, remarks on how the set reflected the temporariness of the encampment, shorthand references to Marc Augé’s idea of the “non-place,” notes on the colonial spatial dynamics evident in the encampment. Or, at least, that’s what I thought I was doing. When the house lights switched on, I glanced down to see pages of illegible chicken scratch. But, standing up to join the audience’s thunderous ovation, I knew one thing for certain: that I needed to write about what I had seen that summer somehow, some way. Indeed, I had already begun.