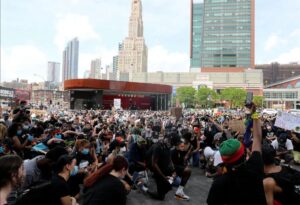 “infections [that] proliferate heedlessly and frenetically”

It was uncanny, to say the least, to return to phrases like these, penned pre-pandemic, while revising my article in March 2020. Therein, the recourse to the epidemiological was a figurative maneuver; in the light of the brutal literalism of COVID-19, it felt, at some level, obscene to retain them. And yet, without them, I would not have an argument.

Having a crisis of faith is essentially the new normal in the humanities, but refracted through the world’s new abnormal, it became something else entirely, especially when teaching a student population disproportionately hit by the virus, as I do. When all of one’s energies are spent trying to hold together not only a course, not only the students, not only oneself, there isn’t much remaining for scholarship. A refrain many of us struggle with, that we manage to more or less keep at bay, returns, only amplified: What is the point?

And yet, remarkably, it was that annus miserabilis of 2020 that provided the answer, that clarified so much, and by so doing gave a deeper import to what I was writing, or, rather, allowed me to see the themes as crushingly timeless, haunting the present day all too vividly. My article begins with a historical argument about how many, in rhetoric that was often epidemiological, saw noise as a social ill that ought to be controlled at any cost; from there, I extend the concept of noise, itself incredibly subjective, to attempts at regulating what I call “the linguistic other,” those whose speech threatens the “purity” of the native tongue, whether through silencing them (as with the titular Windrush generation of George Lamming’s The Emigrants) or through brainwashing them (the working-class youth in Anthony Burgess’s A Clockwork Orange).

As Derek Chauvin slowly murdered George Floyd, his knee on his neck, he told him that “it takes a lot of oxygen” to talk. In this statement, we see, depressingly, that it was not enough to take Floyd’s life: he must, in the process, rob him of his ability to speak, to cry out, to give evidence of common humanity that doubtlessly would have fallen on deaf ears. When the Chauvins of the world stormed the Capitol, they did so parroting the phrases of the president and his mouthpieces in the right-wing media. In the sections on Burgess, I am careful to avoid in anyway humanizing the likes of Alex and his droogs, and all I say there applies here. But it raises some fundamental questions, about how such ears turned deaf, such minds closed off: What role can we as educators play in a larger information ecology to counter this? How might we, for one, redirect the hyperbolic capacity for close reading shown by many QAnon adherents into something beneficial and just? Do we write this off as a lost cause or do we see an opportunity for action?

As I write this, I will later in the day receive my first dose of the vaccine; tomorrow is Inauguration Day, the anniversary of the first reported case of COVID-19 in the country. I am guardedly hopeful that this all augurs well for the future. Looking back, the forces that silenced George Floyd, Breonna Taylor, Ahmaud Arbery, and countless more unleashed counterforces in the Black Lives Matter movement and its allies, who refused to be silenced and spoke as one voice. While we will eventually see the back of one virus, others remain. I have faith, though, that we as readers of all we see will use our platforms, whether on the page or in the classroom, to elevate underheard voices, to correct the errors of the past and presents, and to speak truth so that others will know its name.