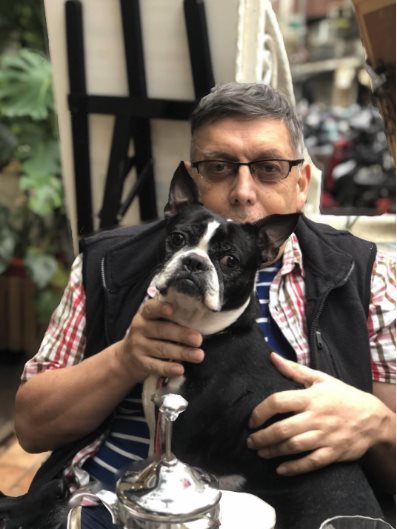 Glossing the Real and the Fictional

I cannot think of any more fitting way to begin this reflection on my essay on New Narrative and Laura Moriarty’s Ultravioleta, than advice Kevin Killian once gave me. I was interviewing him about his novel Shy, while I was writing on it for Strategies of Deviance. He had just set a mug of tea down in front of me and said, “Always have a hook. Be as complicated as you want later, but get the hook ready first.” This is why I’m beginning with the partially “exotic” and partially lurid backstory of my first attempts at writing what became the essay now published.

I lived in Korea for several years and for a time I was connected with national Korean associations of British and American Literature. I should also note that the people I include in the story were all members of the organization from a range of possible universities, so the identities of the guilty are protected. Please be patient with the apparent agenda of this tell-all because, in an M. Night Shyamalanesque twist, the crescendo of bitterness will pirouette into the theoretical and political reasoning for my dedication to New Narrative that motivates the essay in JNT.

In 2009 I proposed a paper to the major annual conference of English language literatures in Korea: a comparison of Laura Moriarty’s Ultravioleta and Norma Cole’s experimental CD-Rom poetry collection, Scout. I would discuss the relations between feminist poetics and the ways “futurism” was configured metaphorically in Moriarty’s novel, and literally/practically in Cole’s use of digital technology in Scout.

My proposal was accepted, but in the acceptance letter there was a directive to send the complete paper to the conference committee for inclusion in the conference volume for distribution at the conference. In other words, the paper had to be completed a little over two months in advance of the conference, complete with editing and annotation. For some reason, I assumed this was optional, and in any event was uncertain if I wanted to give an unpublished manuscript over to unknown hands.

Writing the paper took a lot of preparation. Scout has many photographs both personal and otherwise, and I decided to ask Norma Cole about them. She was incredibly generous and our email exchanges were fascinating and really a sustaining pleasure in the writing. And it became even richer when the poet and tech-wizard Taylor Brady joined the conversation and helped me access the photos for inclusion in my paper. As time wore on, I was startled to find ever more frequent and less friendly reminders to send the completed paper to the committee.

As I began reading and taking notes for the Ultravioleta section of the paper, I was laid low with excruciating pain in my back teeth and jaw. Part of my face was swollen into a permanent semi-snarl. I found an emergency dentist in the Miari neighborhood, which I should already should have been suspicious of, locals called the area, “Texas”.  Two bottom wisdom teeth and two top back teeth were extracted in one go. Excessive blood loss put me in a cot in a backroom for hours. When my condition didn’t improve, the dentist told me he couldn’t let me go home and his nurse would take me to an apartment where I could stay for a couple days to heal (I chalked this up to cultural differences). Oddly, he added, “And you’ll have all the hot water you want!”

The nurse drove me to Ttukseom, a timeworn neighborhood in Seoul whose only claim to fame was its status as organized crime’s favorite place to dispose of bodies. We descended stone steps into an ancient, basement studio with the only light coming from two rectangular slits for windows flush with the sidewalk outside and the ceiling inside, resembling the observation portals in the interrogation room in Kurosawa Kiyoshi’s Cure where the detective succumbs to the spell of the hypnotist serial killer.  One of these windows hugged a furry shadow. “Oh, a squirrel,” I observed. “No, a rat. Don’t let it in.”  The nurse then demonstrated what the dentist meant by “all the hot water you want”. She showed me a gas-powered hotplate and taught me how to change the aerosol fuel cans so I could a produce flame. Fill a pot from the tap, wait awhile, and voilà – hot water.

Fortunately there was a TV and VHS player. During an ebb tide in my vertigo I rented Kim Ki-duk’s, Ago 악어 [Crocodile] about a man who camped on the banks of Han, diving in to to rifle the pockets and purses of the suicides beneath the waters. In the final scene two people tether themselves to a sofa at the bottom of the river, but when they still had to grip the armrests to avoid floating, I felt as if I shared their buoyancy, and the fevered subterranean humidity rendered the garret and the tv two aquariums conjoined at the screen. The throbbing in my jaw conspired toward a syncopation with the tapping of the rat against the pane. A few weeks later I interviewed the only woman in Korea working as a forensic examiner on murder victims. She told me there were so many people in the Han that it was a kind of second city running along side the main one.

The next day I climbed on a bus so local the passengers assumed I had gotten on by mistake. Before transferring to the train, I admired the crime scene of my mouth in the wc mirror. Eventually I arrived home to find five emails from the conference organizer. The last one was a doozy (this was still a month before the conference):

Despite our many attempts to receive your paper in a timely fashion, you have childishly [I was a full professor] failed to live up to your professional obligations. As a result, we have removed your name and paper title from the proceedings. You are still welcome to attend the conference (provided you pay the registration fee) but you are prohibited from participating in any direct way, including during question and answer periods and plenary session discussions. We hope this will inspire you to take your responsibilities more seriously in the future.”

These were not faceless bureaucrats but a cabal of scholars I regularly interacted with as colleagues. This brings me to a lesson Robert Glück taught me about the vital significance of gossip. Among the senior professors who took this action against me was one who often advises his male grad students to go to Egypt for winter break because it “has the best prostitutes.”

Others include a closeted, self-torturing gay man (let’s call him Joon) who also suffers from a bipolar disorder, and two really understanding women professors who identify as feminists and conjoined me into a pact to always humor Joon’s attempts at heterosexual bravado and to stay calm through his upswings. One afternoon the four of us went to lunch. Joon had just gotten his hair dyed and bought a red leather jacket which seemed to trigger a very loud mood elevation. With ill-advised trust that the fellow diners in the crowded restaurant did not understand English, Joon announced he had just watched an episode of Sex and the City in which Samantha was suffering from a “depressed vagina”. He then asked the two women at the table if they had ever encountered this problem. “No,” they whispered, fervently trying to change the topic. “Well,” he crowed. “This jacket has gotten me really randy. I sure hope one of my grad students this afternoon has a depressed vagina. I’m ready to cheer it up in my office. Right on my table.”  One of the women saved the day by asking Joon to remind her why he felt that  Rent was more important than La bohème.  All four of them happily presented papers at the conference I was barred from and assured me that my expulsion had been necessary and had their full support.

The entire situation traumatized me so much that I let the project slide, which I still regret. I am so grateful that Rob Halpern and Robin Tremblay-McGay has given me this opportunity to resurrect and reshape the work on Ultravioleta. I am also determined to return to the work of Norma Cole with a full update and reengagement as well.

Now let us reconsider the incident with Joon. It was of course offensive to women, and completely self-defeating behavior. But it was also an offense against Sex and the City and its ironic amplification in camp. Camp should be subversive, liberatory, compassionate and scrupulous in its alienated scrutiny of contemporary life. Kevin Killian’s work begins from this understanding of camp and goes beyond it. This is a nexus where New Narrative provides a counter-phenomenology and a contrary epistemology to such tragic trivializations of popular culture.

One avenue into the critical gift New Narrative offers lies in the polysemy of “gloss”. Gloss is a shine on a surface: lip gloss and an 8×10 glossy awaiting an autograph. But it is also a definition, an annotation, a critical exposition as paradigm-shifting as a Talmudic commentary or a Freudian analysis. Killian may conjure the glamour of Kylie Minogue’s publicist-created persona, but he also dares to probe the needs her myth can serve. Dodie Bellamy has glossed Dracula and especially Mina Harker for the late 20th-Century, and now she is redefining bereavement in its terrible relevance.

Although not “officially” part of the originally conceived New Narrative group, New Narrative allows us to see how in Ultravioleta, Laura Moriarty captures the thrill of space travel, but also the interior thrill of reading that capture, of writing as forward motion that brings frontiers with it. The hues of Xavier Martinez’s paintings catch her eye, and  the meanings she achieves through them become her A Tonalist poetics. Moriarty glosses the Spicer Decision that exonerated Wyatt Earp; and she glosses the decisions of Jack Spicer that opened him up Martian transmissions, his mind like a radio Moriarty refashions in the broadcasts of Eddie Zed in the café adrift in the sands of the red planet.

Samuel R. Delany reminds us somewhere that “fact” and “fiction” share an etymology.  They are both made. This does not mean they are the same, but that they each harbor a capacity for meaning. The historical figures Moriarty conjures into the “I” are those facts that get a future meaning -Thomas Wyatt, Wyatt Earp, etc. She also grants Earp and Doc Holliday a romance, brought to a beautiful conclusion within Earp’s memory of his lover’s death.  Ultravioleta also includes a novel-within-the-novel, The Astrologer, written by Eddie Zed and read by Ada.  A meta-diegetic gesture, such as Paul Auster’s New York Trilogy, renders the novel transparent to its own fictionality only on the plane of the narration- which in Auster’s case ultimately devalues the detective genre it appropriates. In the Astrologer, Moriarty allows the characters of the novel to experience their embeddedness in Eddie Zed’s story. In both Wyatt’s memory and Eddie’s novel, Moriarty elevates the fictive personae to a level of affective agency.  As a spaceship within the novel, the Ultravioleta is both a vehicle and the metaphor – the transfer from the gloss of the genre to the glossing of the act of writing and reading.