A Brief History of JNT
by Paul Bruss 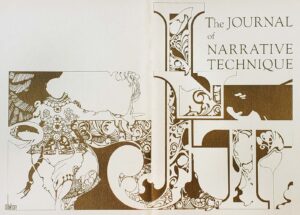 Note from the Editors: This 50th Anniversary Issue was introduced by Paul Bruss, who played a key role in steering the journal through a critical five-year transition, 1993–99 (Vol. 23–27), when it was almost removed from EMU. Under Paul Bruss’s editorial leadership, the journal committed itself to investigating new regimes of theory and seeking out authors invested in challenging the profession’s intellectual orthodoxies. Equally importantly, Bruss introduced a different operational model, one based on collaboration between rotating editors, chosen from among the more recent hires of EMU’s English Department, and this has ensured the journal’s continued intellectual vibrancy and theoretical sophistication. As editors of JNT and members of EMU’s Department of English Language and Literature, we would like to express our sincere gratitude to Paul Bruss for his service to the journal, our department, and the profession at large.

This issue marks the beginning of the 50th volume of The Journal of Narrative Theory, and a brief comment about the journal’s origins and its relationship to another journal, Narrative, may help put this moment of celebration in a larger perspective.

The first issue of The Journal of Narrative Technique appeared in 1971. In the previous decade Eastern Michigan University had seen its enrollment quadruple, roughly, from 5000 to 20,000 students. As a university with roots tracing back to its founding in 1849 as a normal school for training teachers, that explosion in enrollment resulted in a significant expansion of the English department and its programs—and the hiring of new faculty. One of those hires was George Perkins, who brought with him a wealth of editing experience, and who with several other recent hires (Jay Jernigan, Paul McGlynn, and Martin Kornbluth) proposed that the department establish a new journal focused on narrative. For the first twenty-two years of publication George Perkins served as General Editor, with Barbara Perkins as Managing Editor.

Three issues a volume, Winter/Spring/Fall, c. 300 pp. per volume, most of the essays in those early years focused on narrative problems within particular texts, especially novels from the 19th and 20th Centuries. Now in its 50th year of publication the English department at Eastern and the editors of JNT do wish to recognize the devotion and the stewardship of the Perkins during virtually the first half of the journal’s history.

In 1984 JNT sent out an invitation to scholars and students interested in narrative literature to join an association of prominent literary scholars, The Society for the Study of Narrative Literatures. Beginning its official activities in 1985, which coincided with the fifteenth year of the journal’s publication, JNT became the official organ of that new society, with an expansion of the Editorial Board beyond members of Eastern’s English department. In 1986 the Society began a series of annual spring conferences, initially with some support from Eastern Michigan, but a series that eventually brought the Society to locations throughout the United States and abroad. Eventually the Society (SSNL) becomes The International Society for the Study of Narrative, and at its 1991 International Conference in Nice, France, revising its bylaws, the Society withdraws its support for JNT as the Society’s official journal. George and Barbara Perkins edit JNT Volume 22 (1992) and in the meantime write a prospectus for a new journal, Narrative, to be published by Ohio State University Press and edited by James Phelan—the first issue to appear in 1993.

The year 1993, then, witnesses the birth of Narrative as the official organ for the Society (ISSN), but it also marks the beginning of a more collaborative editorial operation for JNT at Eastern Michigan. What prompts this change in operation is the hiring, in the two decades straddling the turn into the twenty-first century, of a cadre of new department faculty well-trained in current theoretical developments and hence interested in fostering new directions for the journal as it transitions from JNT: Journal of Narrative Technique to JNT: Journal of Narrative Theory.

Since 1998, the journal has, with each general editor serving roughly a four-year term, prospered under the guidance of Ian Wojcik-Andrews (Connecticut 1990), James Knapp (Rochester 1992), Craig Dionne (Carnegie-Mellon 1992), Laura George (Ohio State 1993), Joseph Csicsila (Nevada—Las Vegas 1998), Abby Coykendall (Buffalo 2002), Andrea Kaston Tange (Wisconsin—Madison 2000), Elisabeth Däumer (Indiana 1989), and Natasa Kovacevic (Florida 2006). Because the rotation has drawn on the varied theoretical strengths of these editors, interests especially in feminist, new historicist, and postcolonial frames, JNT has in the last two decades experienced a broadening of perspective that largely coincides with the highly distinguished personal publication records of the editors themselves. In its jubilee year JNT celebrates this editorial transformation, one impossible without the devotion and talents of this younger faculty.

Another manifestation of JNT’s collaborative editorial practice is its inclusion, in nearly every volume since 1997, of a special issue focused more specifically (and usually edited by prominent scholars and theoreticians outside EMU) on issues of particular interest to various groups within the academy. In the last two decades some of these special issues have provided the journal with opportunities for exploring—in depth— particular writers, theoreticians, and cultures. Issues on Contemporary Hispanic Fiction (Vol. 27.1), on Benjamin and Bakhtin (Vols. 32.3 and 33.1), on Popular Shakespeares (Vol. 41.3), and on Muriel Rukeyser (Vol. 43.3), all reflect the wide range of interest at the heart of JNT’s practice since 1993. One group of special issues has also provided an especially large commentary on narratological problems within various cultural con- texts: Cinema and Narrative (Vol. 30.3), Travel and the Body (Vol. 35.3), and Narrating Cities (Vol. 39.3).

But a number of these special issues, reflecting some of JNT’s theoretical preoccupations during the past two decades, emerge as virtual dialogue if juxtaposed: Feminist Historicism and British Narrative, 1600–1900 (Vol. 28.3) with Women’s Experimental Forms (Vol. 48.3); Realism in Retrospect (Vols. 36.3 and 38.1) with Pre- modern to Modern Humanisms: The BABEL Project (Vol. 37.2); Non/Narrative (Vol. 41.1) with Dis/enabling Narratives (Vol. 47.3); and Decolonizing Narrative Theory (Vol. 42.3) with Consensual Empires (Vol. 44.3). Competing theories wander through these special issues, but whether the dialogue is situated in feminist, new historicist, narratological, or postcolonial frames, the issues mark JNT’s efforts to enliven the critical discourses that reflect a world rife with cultural unmooring. Key to these special issues, of course, has been the assistance of the guest editors who have brought their own understandings to the projects and helped JNT in this broadening. The Journal thanks all of them.

Since 2003 JNT has also sponsored an annual dialogue that brings to the university campus two prominent scholars who engage each other on a topic of current interest to them and to the Eastern community. Within the last decade several of these dialogues, “Failing to be Subjects: On Queerness and Negativity” (2011), “The Queer Commons” (2013), and “Thinking Bodies” (2014) addressed the difficult terrains of subjectivity and identity. Others, “Globalization Now: Flows and Limits” (2010), “Homi K. Bhabha and Claudia Rankine” (2016), “Temporalities of Crisis and Condition” (2017), and “Stand Whose Ground? Indigeneity, Migrancy, Sovereignty” (2019), addressed the instabilities of larger cultural constructions.

And still others, “Nonhumans: Ecology, Ethics, Objects” (2012) and “Environmental Futures” (2018), have provided commentary on the problems and anxieties within a posthuman universe under stress. Almost a culmination of the academic year, these annual spring dialogues provide a public forum especially for students, many of them engaged in graduate study, to interact with thinkers actively engaged in research and writing focused on current cultural crises. Having read the guest speakers’ publications and discussed them in their seminars, the students and faculty make these dialogue exchanges the occasion to explore literature’s potentials for understanding a fraught world. Deeply appreciative of this annual spring rite near the end of Eastern’s academic year, the Journal thanks all the Dialogue guest scholars and artists as well.

With this now two-decade history of editorial rotation, of special issues edited by scholars beyond Eastern’s faculty, and of spring dialogues bring- ing in guest scholars, JNT has prospered as an especially collaborative effort involving many scholars and students interested in current theoretical approaches to literature. Literary journals have always promoted the conversations between essayists and readers within the large world of committed engagements to literature, but on this fiftieth anniversary of JNT, the editors wish to acknowledge how deeply embedded the journal has be- come in the life of Eastern’s English department.

Beyond the collaboration of the faculty and students in the literature program as well as in the creative writing program, the editors also acknowledge the support of the university’s administration, especially that of Provost Ron Collins in the transition years of the 1990s and presently of Provost Rhonda Longworth. JNT has matured and become a journal that adroitly attends to and pro- motes conversation about literature’s role within a complicated world, and the editors recognize that administrative support has also made this 50-year history possible.