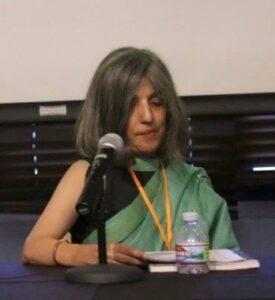 “Everyone lives in a story,” says Tridib — in one of my all-time favorite lines — in Amitav Ghosh’s The Shadow Lines. Does our critical work also take succor from stories? How do scholarly output and story, the dispassionate and the affective, the critical and the personal, intersect and mutually fructify? As someone discussing a ‘scholarly’ article about to be published in JNT, what role have stories played in shaping this piece that I am publishing with your journal?

The resolve to continue working on this line of thought and to share it with readers of such a forum as yours begins with one such story of a conversation. When I first presented a very early, and of course, much shorter version of this piece at a conference held at the Huntington Library in San Marino, California, I was gratified by the conversations it engendered. But one conversation with a fellow conferee stays with me in particular. In a largely appreciative, well-meaning, query, my woman interlocutor asked me if my thoughts about the besieged nature of women’s rooms did not in fact directly hark back to my own Asian location. And I must confess, my inner response to that was complex, to say the least!

Because in some ways, yes, that was what I was largely arguing in my paper, that any idea of the ‘room’ had to be firmly placed back in its material indices, as a necessary addendum or caveat to the universalist resonances that it has gathered into itself since Virginia Woolf’s A Room of One’s Own, and in emphasizing that in dialogue with Woolf’s seeing privacy as precondition for creativity, the colonial contemporaries of Woolf foreground creativity as in fact shaped, even fueled, by the contingent nature of roomless rooms. And yet — and since one is not fighting shy of the affective, one might as well say it! — something in me chafed, even bristled, at that implication of my continuing and ‘scholarly’ engagement with the question of space in women’s studies being brought down to only the experiential.

The essay, in its final shape, I believe, unfolds at those faultlines, as a necessary reflection of how women scholars from my part of the world both need to map the politics of location onto any more capacious understanding of the field of women’s studies, but at the same time that the phenomenological quality of argument need not presuppose our entering a hallowed citadel of scholarly complexities (because let us face it, with Woolf in the frame, one treads circumspectly) as ‘baggage-carrying’ postcolonial malcontents. So how do you ‘do’ location and yet retain a theoretical poise in the argument, and do you necessarily have to…? I need to say that the two wonderful editors of JNT have given me the ‘room’ to ask these questions through this essay.

The tempestuousness of Rhys, the provocativeness of Mansfield and the theoretical weight of Woolf, all come to bear equally, in fractious albeit enriching ways, in this peregrination through women’s rooms. So as I wait for more dialogues to be initiated by my dialectical ambling into women’s rooms in early twentieth-century modernist women’s writings, I think what I am suggesting is, quite in line with my argument in the article and going back to the line from Ghosh with which I began, that there are ways in which we can both inhabit and un-inhabit our own stories.

Ruchi Mundeja is Associate Professor in the Department of English at Lakshmibai College, University of Delhi. She completed her doctorate from Jawaharlal Nehru University, New Delhi. Her research is primarily in the areas of modernist and postcolonial literatures, with special focus on women’s writing. She has recently contributed a chapter to the volume Katherine Mansfield and the Bloomsbury Group, edited by Todd Martin, and to Re-Forming World Literature: Katherine Mansfield and the Modernist Short Story, edited by Gerri Kimber and Janet Wilson.

Dr. Ruchi Mundeja's essay, "Rooms Not Quite Their Own: Two Colonial Itinerants, Katherine Mansfield and Jean Rhys, and Narratives of Roomlessness," appears in JNT 50.1